Hi and welcome once again to the cinematic pages of the Glastonbury Festival’s website at the “Internationally renowned Pilton Palais”, a mini film-festival within a festival, set in a marquee in the Acoustic field, on the eastern edge of the site. As usual admission is free for all shows, no advance booking required, just be sure to arrive in good time to be sure of getting a space to sit-down in the marquee. 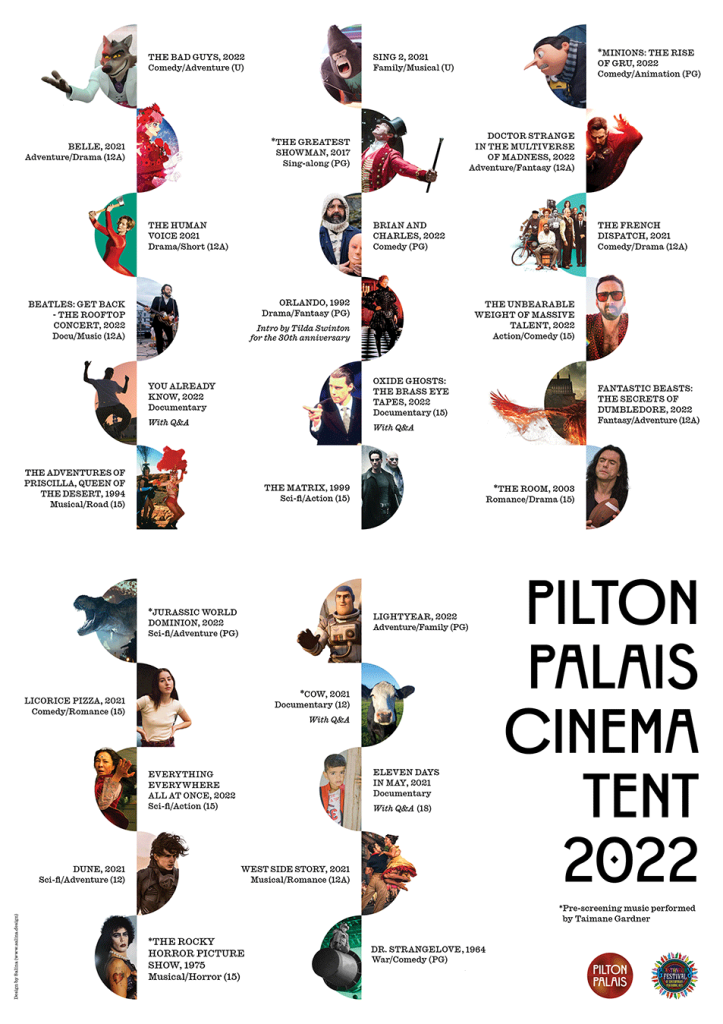 It’s great to be back and in full swing again after two enforced fallow years. Things have changed considerably in the cinema world during this time, what with most film productions shutting down for almost two years, and even now some older audiences are still reluctant to set foot inside cinemas again, with some films releasing straight to streaming platforms, while others only stay in cinema’s a month or so at most before moving on to streaming. This initially presented us (Riyad and myself, joint area organisers) with a big challenge putting together a relevant program, but I think you will agree we have risen to the occasion. In fact, I’d go so far as to quote the big man himself Mr Eavis, with those immortal words and say “I think this is the best festival (film line-up) yet !!”.

Our featured musical artist this year comes direct from Hawaii:- Taimane Gardner, Ukulele Virtuoso & composer who will be playing six, fifteen-minute film themed sets in the Pilton Palais ahead of *specific films.

The cinematic treats we have in store for you this year are no less than five films which have a Q&A or Introduction or both with the director or actor. These are in chronological order, first up is a special preview screening of You Already Know, an in depth look at the New Orleans dance craze “Bounce” sweeping the world by storm, with great music, high energy narration by locals and great visuals, we are also treated to a Q&A by the director Rhyannon Hanbury-Aggs. It really makes you want to hop onto a flight to America and witness it all for yourself, after you get home from the Festival. Then we have Orlando which celebrates its 30th anniversary this year, and in her first starring role, introduced by none other than, our friend and patron of the Pilton Palais, the wonderful, academy award winning Tilda Swinton – Yay! Loosely based on Virginia Woolf’s 1920’s novel, it’s a tale of transgender identity that seems even more relevant today than when it was first released in 1992. This is followed by Oxide Ghosts:The Brass Eye Tapes introduced by Michael Cumming, the director of the classic British comedy TV series Brass Eye created by Chris Morris. Parodying current affairs and news at the time, giving you the opportunity to see the unseen footage from the original series shot in 1997, followed by a Q&A with the director himself. This is another chance to see it following its limited release in Picturehouse Cinemas earlier this year, it is only ever screened at live events – so this is a very rare chance to see it. Then on Sunday we have Cow which documents the everyday life of a typical dairy cow, shot over four years, including the no holds barred highs and lows of life living on a farm not unlike this one (Worthy Farm which plays host to the festival). What is really heart-warming to see is how the cows react when allowed back into the fields after the winter, this is exactly how the cows jump for joy here when allowed back into the fields after the Festival! They have to come off the fields three months before the Festival, life’s not fair is it? With a Q&A by the multi-award winning director Andrea Arnold, a shining light of the UK independent film industry, also known more recently for the popular TV series Big Little Lies. And finally, on a serious note we have Eleven Days in May, a documentary on the 11 days of bombing on Palestinian territory of Gaza in May 2021, seen from the perspective of the children that live there. Narrated by Kate Winslet and directed by Mohammed Sawwaf and Michael Winterbottom. With a Q&A by the director Michael Winterbottom (who also directed: Greed, The Road to Guantanamo and 24 hour party people).

Also keep an eye out for Licorice Pizza, and have an opportunity to watch the film and see Alana Haim and her sisters before they do their gig on the main stage on Saturday evening. Who knows they may come to introduce the film (fingers crossed!).

Now here are the highlights of our purely hedonistic entertainment just for the sake of it. We have The Greatest Showman Official Sing-A-Long, and after mid-night screenings of Rocky Horror Picture Show, yes, can you believe it’s more than two years since we last screened it? And then we have Tommy Wiseau’s The Room for its first ever appearance at Glastonbury! Have your wooden teaspoons at the ready, no plastic ones please we are environmentally conscious after all!

Plus, we are privileged to have a special screening of Minion’s: The Rise of Gru and the new feature length version of Brian and Charles, both of which are not out until July. Finally, we finish up with our Sunday Morning Pixar classic movie, this summer’s hit Lightyear. Plus a host of other drama, action and sci-fi movies. Well, I think that’s enough waffle from me, Mike

Don’t forget to follow us on our socials for 2022 information and checkout our previous years entertainment in the Pilton Palais on our YouTube channel.

SCROLL BELOW FOR OUR DAY-BY-DAY LISTINGS, SYNOPSES FOR THIS YEAR’S FILMS CAN BE FOUND IN THE SIDE BAR